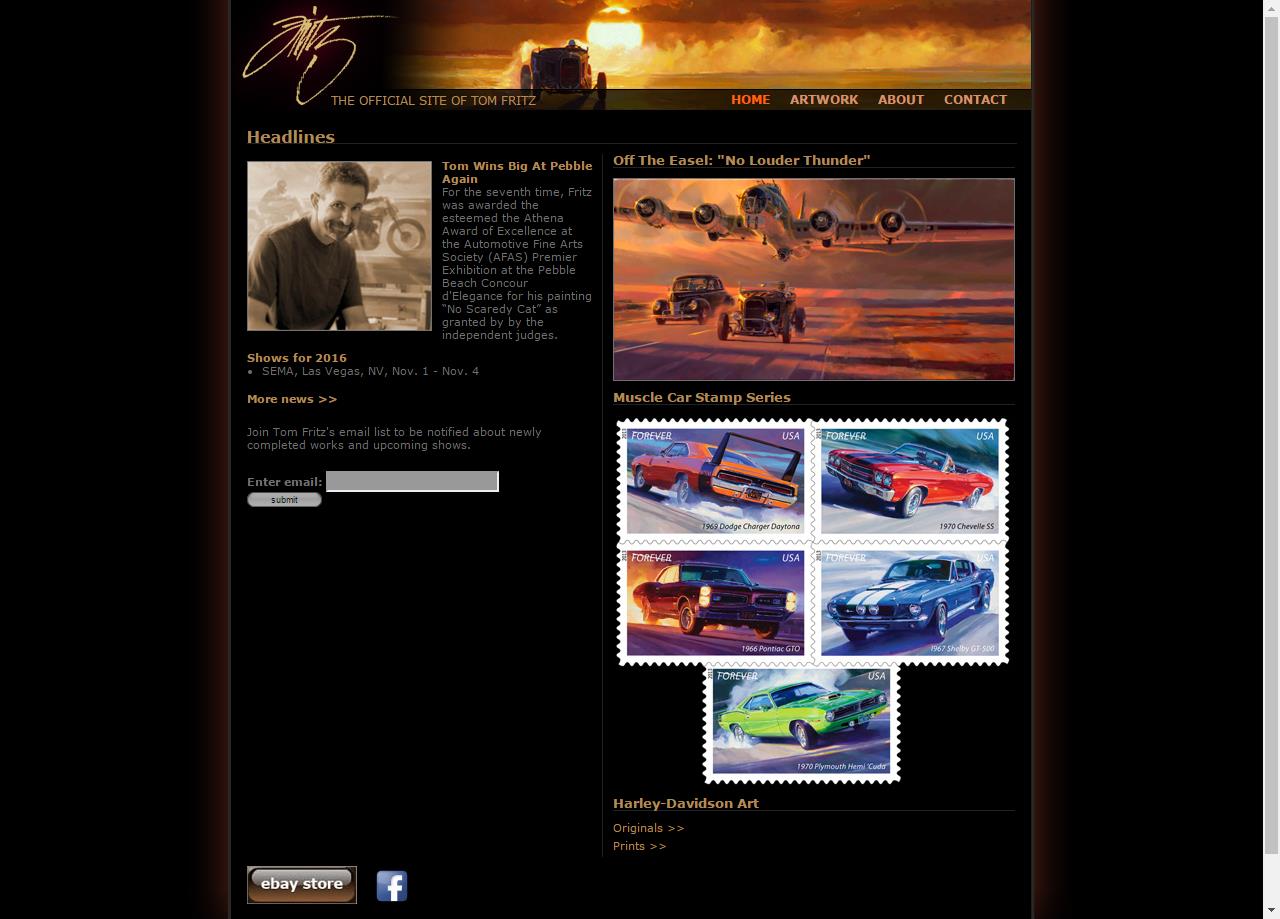 Tom Fritz has taken his fascination of a movement once cast aside and brought it forth to the mainstream to be reexamined and recognized as a valuable element of the American tableau. Born and raised in San Fernando, California, Tom's vivid childhood recollections of the motorcycle and automotive cultures that were prevalent in Southern California during the 60's and 70's are a part of the power that have established him as a prominent artist of the genre. As one critic described, "Colorful, impressionistic brushwork, and simple, yet beautifully structured compositions charged with a hint of narrative drama are hallmarks of his paintings. His art signifies a theme; a reflection of an era." Indeed, his paintings are a celebration of the memories and observations made since his childhood – a unique and sensitive interpretation of the emotion and beauty of power.

For more than two decades after earning his bachelor's degree in two-dimensional art from California State University Northridge, Tom serviced Fortune 500 defense firms including ITT, Litton Industries, and Northrop Grumman, and clients such as Petersen Publishing and the United States Army and Air Force as a designer and illustrator, while accepting freelance commissions on his own time. Today, he paints out of his studio in Ventura County, California.

For those who are not familiar with this artist's work, it is distinguished by an honest, uncontrived approach to reality that is tempered with the soft-edges of impressionism. Fritz's works are acclaimed for taking the subject matter beyond the traditional limitations of the genre. As a member of the Automotive Fine Arts Society (AFAS), Tom has won the prestigious Peter Helck Award (Best in Show) an unprecedented six-times at the Pebble Beach Concours d'Elegance, in addition to several Athena Awards and the Lincoln Award of Excellence. At the Meadow Brook Concours, Fritz garnered several Awards of Excellence in addition to the Stanley Wanlass and Spirit of the Automobilist Awards. Fritz served on the Induction Committee for the Mattel's Hot Wheels Hall of Fame at the Petersen Automotive Museum in Los Angeles.

After his widely acclaimed 1998 Harley-Davidson® Annual Report series, Tom was commissioned by Harley-Davidson in 2001 to paint an image commemorating their 100th Anniversary, and has since been licensed by the Motor Company to pursue his continuing investigation into their colorful and multi-faceted history. He has been honored to have painted the portraits of Willie G. Davidson, and retired CEOs Richard Teerlink and Jeff Bleustein. Fritz is currently represented by the Sander's Galleries in Tucson, Arizona, and Kustom Lane Gallery in Melbourne, Australia. His work can be found in many private and corporate collections around the world, including the Smithsonian Institute, the corporate office of the AAA, the Wally Parks’ NHRA Museum, Pittsburgh Paint and Glass, General Motors, and the Ford Motor Company. His work has been reproduced in several internationally published magazines.

Life needs to be explained. This is where that happens.

Dave Coates from Darlington, England, has been stunt riding professionally for more than 20 years now.